We were told that this year there is a “bumper crop of holidays” built into the school year, and that we should take advantage of every long weekend to explore.  So last week when the kids had Thursday and Friday off from school for teacher inservice days, we took off for Indonesia.   We all needed to get away from the busyness of Singapore.  We needed to get away from the crowds, traffic, and concrete and find some peace & quiet,  sand, and salt water.  And we found that just a short ferry ride away!

A one hour ferry took us  across the Singapore Straight and landed us right on the white sands of the Bintan Lagoon Resort, Indonesia.   We weren’t sure where we were going or what to expect, but we knew almost immediately that this would be a nice relaxing night away from home.  We had 90 degree weather with blue skies, a lovely fall day on the equator. 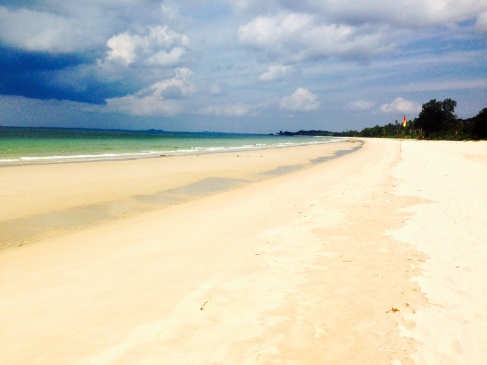 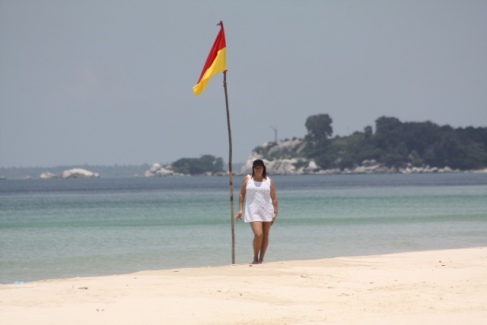 We snorkeled,  played with little hermit crabs, threw sand on each other (well, only Shane & Cale did that),  took a banana boat ride from hell (the crazy driver spun us in circles for 15 minutes straight and even made Maria cry),  got sunburned, drank at a swim-up bar in the pool  (don’t worry, the kids only had fruity drinks),  slept in rooms with large numbers of biting ants, ate way too much food,  invited to karaoke with the band  (we refused because they would  had love ballads on their playlist & no 80’s rock)  and returned home all in the space of about 36 hours. 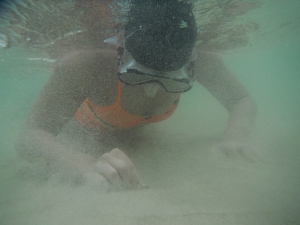 Some highlights of the trip:

1.  No Wi-Fi !  Oh the kids were distressed, and desperately tried to tether into Trents iPhone,  but without great success.  It would kick them off quickly, and so Trent & I really enjoyed having conversations with the kids and just being technology free for nearly two days.

2.  The banana boat ride was exhilarating.  When I say it was a  tube ride from hell, it really was.  I joked on the way to the tube that the 15 minute ride we paid for was probably going to be 14 minutes too long … perhaps I jinxed ourselves.  I swear that everytime we gave the drive the “thumbs down” sign, meaning to slow down, he would instead pick up speed!   Maria was literally crying, her fear of being thrown into the depths of the oceans with the great white sharks was taking over, and she was paralized with that fear.  Shane and I were in the front of the tubes (it was two banana boats tied together) and between the salt water clearing my sinus cavities, Maria crying, and Shanes non-stop commentary, I laughed like a maniac for the entire 15 minute ride.   Maria wanted off the thing for 15 minutes straight, but the minute she was, she said, “that was fun!” 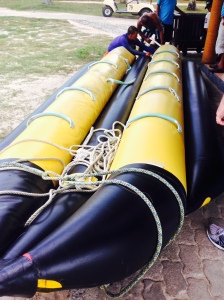 3.   Two jelly fish!  We only saw two jelly fish .. but they looked different from any other jelly fish I’d ever seen.  They were dark in color.  So I talked with some locals … and they said … “if jelly fish have short tail, no dangerous.  if jellyfish have long tail, like this (holding their hands wide apart) then very very dangerous.  you get very sick, very fast (with eyes wide)”.  Okay then, I proceed to use hand motions and description to describe the tails that I’d seen, and came to the conclusion that ours were safe, and so Maria happily posed for some pics with the two jelly fish (but those pics didn’t come out) 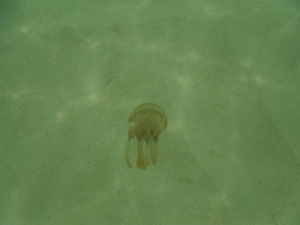 4.  Italian dinner!  We passed on the seafood buffet and opted instead for the Italian restaurant onsite.  Of course, with the maiden name  “Oliverio” , you better believe that I’ll vote for Italian food every time.  However, everyone else in the resort passed on the Italian.  We five Blinkmans were the ONLY patrons in the restaurant.  For the entire meal.  It was silent, and awkward, and we had too many servers attending to our every need, but the food was delicious and we will never forget the night we had an entire restaurant to ourselves.

5.  Maria made an awesome 14 second video of koi fish singing.  I’m gonna post that next.  This video alone made the trip worth it. Here is a teaser photo:

6.  The south china sea!!  The water was emerald green, no waves, with squeaky sand.  Lots of sand dollars, and fun hermit crabs.  And  very few people.    We snorkeled around some beautiful coral (but not as colorful as the caribbean coral reefs) and saw some fun fish.  Yes, I did see an eel … and I lifted my head out the water to scream, and when I looked back down, the thing was gone.  A bit creepy but very exciting!

7.  With no technology, and with only the cameras on the phones working, there were lots of “selfies” taken (for those of you who haven’t heard this term before, a “selfie” is a self portrait”) .  Here are a few of my favorites: 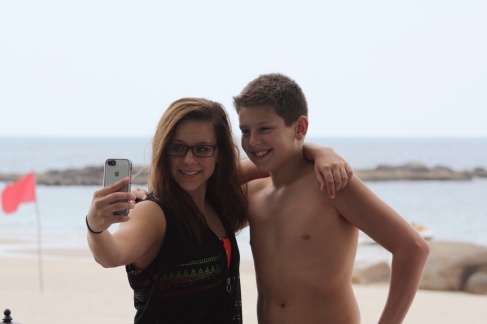 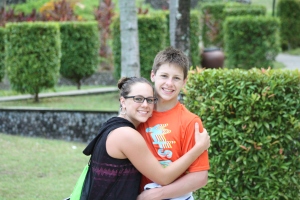 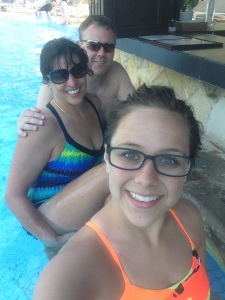 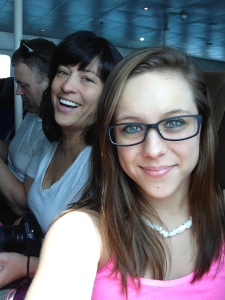 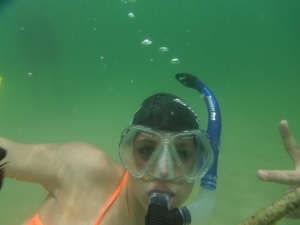 Clearly, when Maria is without her phone,  laptop or other technology, she manages to get into just about every photo!  She likes to be taking the picture and she likes to be in the picture!  She is a typical teenage girlie!!

One thought on “Bintan Lagoon, Indonesia”