You might call them critters, bugs, insects, snakes.  I call them terrifying.   Some of them are straight out of a horror movie.

Oh, if you ask one person,   you’ll be told that no, there are no snakes here.  The next person you ask will tell you there are.  Who to believe?  Well, I asked the guards at our condo gate, Mel and Lim.  And they told me that just a month ago one of my neighbors found a small spitting cobra in their drain that was either outside their condo or in the drain inside their condo . I pray they were referring to the “trenches” as I named them, the water canals, outside the condos.    (each bathroom, and the kitchens here have drains in the floors, so that when cleaning,  you can dump a bucket of hot soapy water right on the floor and then squeegee it right down the drain.  it’s very practical and very convenient, until there is a spitting cobra in it.) 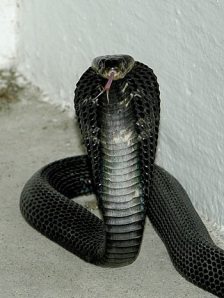 Then I ask another, and they tell me that a lady recently died from one of these “critters”, and right near our home too, within a mile.  She was found dead in the morning, and they knew it was from a spitting cobra, because her skin turned blue.

So I ask one more person, and they tell a story about their dog getting spit in the eyes on two different occasions.  (Is it possible to survive that?  more than once?)

I decide to quit asking about spitting cobras.  Then my neighbor Scott sends me a picture of a very slim but very long lime green snake weaving it’s way along the tree branches.  He says it was like a long piece of yarn up there.  Oh great, now I’m afraid of walking under the trees.

Then there are the stories about the spiders that are “as big as your hand lah”  (Singaporeans end every sentence with a “Lah” … it’s Singlish, and it’s fabulous)  As big as my hand???   I haven’t seen one of those yet.   Thank goodness!

But I have seen cockroaches that would stop you in your tracks.  One was at Ikea,  (of course)  and the other, ahem, right in my living room, making its way casually across the room, headed to unknown destination, I pray not my bedroom.    Once I calmed down, I kicked outside the door, where it landed upside down, and later died.  I swept it up later, feeling very triumphant.  However, all night long I felt the creepy crawlies.

I believe that cockroach critter was brought into my house  by my boys.  They were playing tennis, rather, they were in a heated game of spike-the-yellow-ball-at-each-other-as-hard-as-you-can, and many of the tennis balls were landing outside of the tennis court enclosure.  So Shane and I went around the outside of the gate, into the raw jungle to retrieve the balls, and there were about 40 up there, so of course we got them all.  It was very very stupid of us … first because clearly we were the only ones who ever thought of getting the balls, some of them were obviously up there a long long time, hence the cockroach that was probably living on one of them and it hitched a ride right into my home.  Also, for the love of Mike, there were probably spitting cobras and hand-sized spiders right there watching us, ready to spit, bite,  and kill us at any moment.  Anyhow, I was told that there are thousands of cockroaches here.

Yup, I asked around about the cockroaches.  “They were here way before you, you cannot get rid of them.  Don’t eat chips on couch lah”

Um, how did they know I eat chips on my couch???   Supposedly some people have cockroaches in their cars even, because they eat in the car, drop crumbs, and then the critters move in.  Gives me the shivers.

Back to the critters … there are also monitor lizards.   I heard about them, and was told they move real fast, so get a good look before they take off.  Well, one day Trent and I got ambitious and decided to jog through the Singapore Botanical Gardens (along a paved path, of course.  you really think I’m gonna explore the jungle?  and up ahead I see what looks to me like a giant alligator on the path.  An alligator?

I nervously look around,  how am I gonna pass this thing?  I’ll be forced to go around it, into the grassy cockroach area, or I’ll have to wait it out.  No one is around.  Trent is off in the other direction, and he has his earbuds on, so even if I scream, he won’t hear me.  As I get closer, I realize that it’s a monitor lizard!!!  How exciting!  So I am thinking, look at it quick before it takes off, right?  Well, this one doesn’t go anywhere.  It just sits there.  And as I get closer, it doesn’t looks so scary to me any more.  So I get closer.  And closer.  And I take a few pictures.  And then later my friend Kathy tells me that they are very dangerous, and what was I thinking??   They have terrible bacteria in their saliva that causes deadly infections, and powerful legs with long claws.   I felt incredibly brave when I found Trent and showed him my pictures. 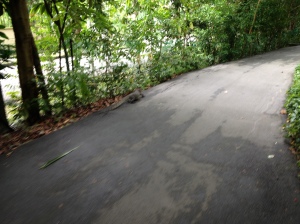 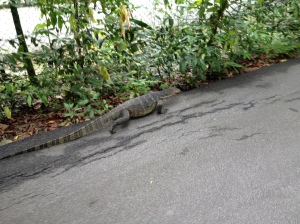 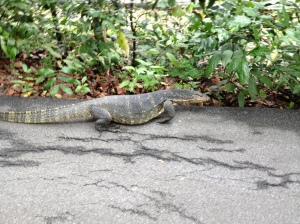 Back to the critters.  Monkeys.  I have only seen the one in our condo pool.  I have a friend on facebook who posted that she had one come right into her house (she’s one who leaves the air con off and the windows open).    She said she uses a water gun to get the monkeys out of her house.

There is a white macaw that lives near our condo, and every once in a while I will see it, along with some other really beautiful solid yellow birds.  Other birds I have seen are black birds and  pigeon-type birds, and while the guards told us that there is a fat bluebird that sits on a branch below the kids bedrooms at night, we have only seen it in the dark.  (yes, Trent and I walked back there every night for a week trying to see that bluebird.  When we would get close, it would fly away.  We’d say, okay, remember, it’s THAT branch.  The next night we would go back, but forget which branch it was, and lose all chance of creeping up on the bird. )

There is a trendy area here called “Dempsey Hill” and they have some macaws with clipped wings.  They are fascinating to see, as they look exactly like the Fruit Loop bird, and there are about 2 dozen of them.  Some of them talk even!!  These two pictures don’t do it justice, as I only had my iPhone to snap pictures.  I never expected to see such a sight when we went there. 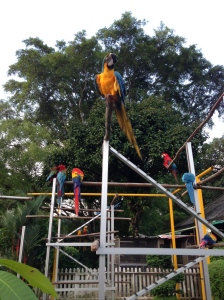 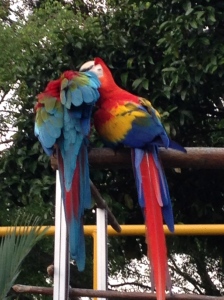 There are some squirrels here, but not many.  And at night the snails come out.  These are big, hard-shelled snails though, and are quite interesting.

Mosquitos.  Now, coming from the upper midwest, where the mosquito is the Minnesota state bird, we are used to mosquitos.  I was told prior to coming to Singapore to bring lots of “mozzie spray”.  So I did, and guess what, I haven’t used any at all!!!  Oh there are mosquitos here, and lots of them.  But, they know how to manage the mozzies here.  “we fog lah”.    Look for an upcoming post on this lah.

Lastly, there are little geckos everywhere, like the kind you see in Florida.  They are a pain though, because if they come into the house, while they eat the bugs, they also poop all over the walls.   Still trying to decide which is worse … bugs in the house or geckos in the house?   As long as it’s not a monkey, right?  Getting my squirt gun ready just in case!!!! 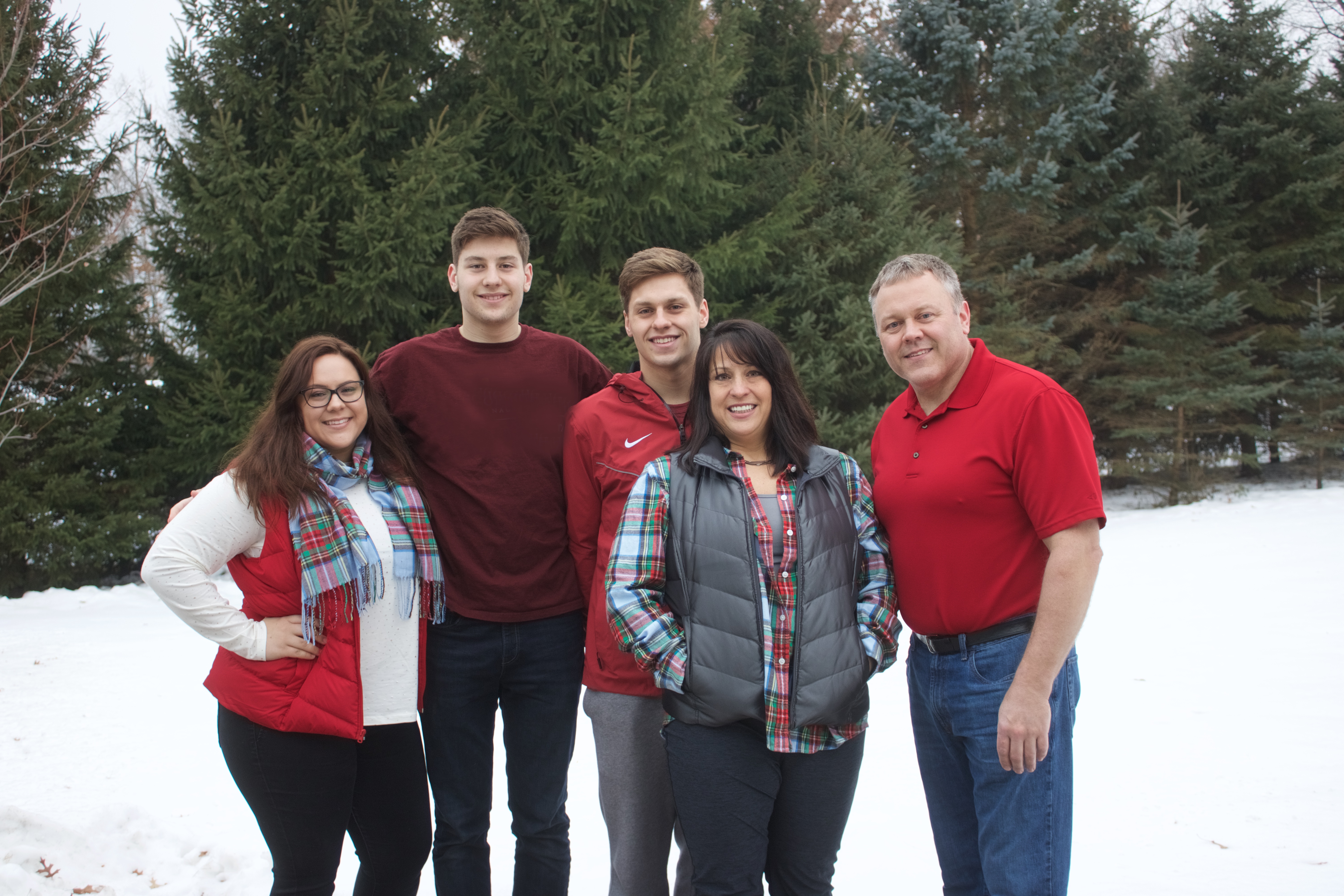