Last week I took the kids out of school so that they could compete in Western Australia’s Long Course Swimming Championships.

All three kids qualified, and since I am THAT mom, you know, the one who thinks swimming is as important as school, (if not more important)  we took off Sunday morning for a 5 hour flight to Perth Australia.  Trent couldn’t make the trip because he was headed to Hong Kong and then Bangkok instead for work.

The kids haven’t been training regularly, as they missed 12 days of practice for our Christmas vacation,  they weren’t tapered, and honestly, I wasn’t even sure if their coach here in Singapore knew they were competing, so I wasn’t expecting too much at this meet as far as times go.  I was hoping that the kids would gain valuable racing experience, and make some new friends along the way.  When we lived in the states, I could say that we were in a swimming routine.  We knew most of the kids at the meets, we were familiar with the pools, were feeling pretty comfortable.  I was thinking that this would be a great learning experience for Maria, Shane & Cale, by getting them out of their comfort zone in a foreign country, where they don’t know anyone, are unfamiliar with the Australian rules and ways of doing things, didn’t know the pool, etc.

To say this experience far exceeded our expectations  would be an understatement.  My kids stepped up to the challenge, and loved every second of this adventure.

Cale is the only one who was nervous, which in turn effected his races.  But while he didn’t have any standout swims or massive time cuts in any of his six events, he was right on where he should have been, at or about his previous times.  Couldn’t ask for more!!

Maria had three events and cut time in two of them!  But only having three events over a four day meet meant that she had a lot of down time, where she was just sitting around, waiting for her brothers to swim.  At first, she used this time to do a little homework, do a lot of reading, do a little people watching, and do a lot of boy watching.  Everyone knows swimmers have the best bodies, but add to that the bronze tans, the highlighted hair, the accent, and super casual, laid-back attitude, and wah-lah, you have the Australian swimmer. 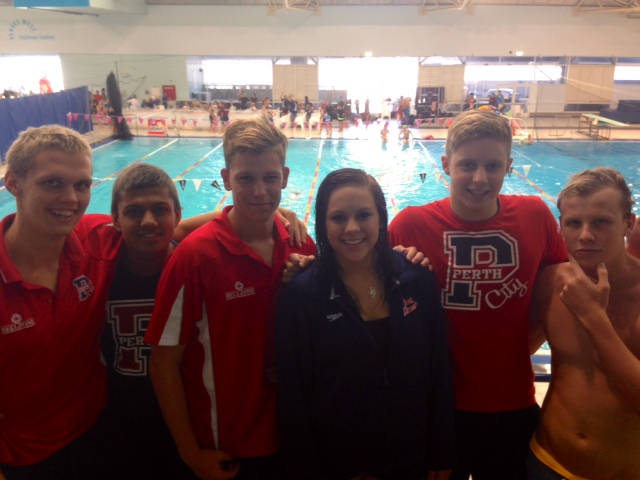 On the third day she realized how nice the kids were, and began to make friends.  And since all the kids were interested and curious about the Americans at the meet, it was easy to make friends.  She left that meet with many new friends, and I am confident that she will continue to keep in touch with them.    And now I have a bargaining chip with her, since she desperately wants to return to Australia in April when we go for the National Championship meet.  She hasn’t qualified yet, and might not since she’s thinking of dropping swimming for a bit to try out for a school play.  Should I bring her with? I will use this April meet and work it best that I can, and then yes, I will probably take her with.   Remember, I am THAT mom, who believes that not all learning happens in the classroom.

Shane had 9 individual events to swim, and he swam fast enough in the prelims in the morning to qualify for the finals in the evening.  We would try to rest in the afternoon, between sessions.  He was pretty amped up, he was cutting time and doing well.   He quickly became the swimmer who everyone was watching, the 13 year old from America who swam fast.  The fact that he always wears a headband also makes him stand out, and at one point he was being interviewed for live streaming on the internet, and he was asked about those headbands, and why he does it.  He said, “Well, Ryan Lochte has his shoes, and I wanted something of my own”.   Love that!

Shane cut time in every event, achieved two more Speedo Sectional times (bringing the total to 4) and he broke a Western Australia All Four Corners Record in the 200IM.   He ended up with four 1st place finishes, two 2nd places, and two 3rd places, all in the 13 year old age group.  His 50 Breast stroke was classified differently since it was only a 50, and he made it to #14 overall, from kids aged 13 to 22.

Maria and I met him while the boys were swimming, literally in the water swimming.  Most of you know that at swim meet you will sit for hours and hours, waiting for a 30 second or 1 minute race.   Then you will wait hours and hours more for the next 60 second race.  Well, after waiting and waiting, my boys were finally up next, and heats right after each other, and I had to make the choice to watch my boys swim OR meet James Magnussen.   What do you think I did???

Of course, I met James!!  I was so excited and frazzled, feeling guilty for not watching my boys, that I completely forgot that I wanted to get a “selfie” photo, and instead got this one: